TARA-002 is an investigational cell therapy based on the approved broad immunostimulant OK-432.
TARA-002 was developed from the same master cell bank of genetically distinct group A Streptococcus pyogenes as OK-432.

Lymphatic malformations are rare, congenital malformations of lymphatic vessels resulting in the failure of these structures to connect or drain into the venous system. Most LMs present in the head and neck region and are diagnosed in early childhood during the period of active lymphatic growth, with more than 50% detected at birth and 90% diagnosed before the age of 2 years. Although the specific etiology of LMs is unknown, fetal chromosomal anomaly has been found to be associated with 60-70% of LM cases. The most common morbidities and serious manifestations of the disease include compression of the upper aerodigestive tract, including airway obstruction requiring intubation and possible tracheostomy dependence; intralesional bleeding; impingement on critical structures, including nerves, vessels, lymphatics; recurrent infection, and cosmetic and other functional disabilities.

When TARA-002/OK-432 is administered locally for LMs, it is hypothesized that innate immune cells within the cyst are activated and produce a strong immune cascade. Neutrophils and monocytes infiltrate the cyst and various cytokines, including interleukins IL-6, IL-8, IL-12, interferon (IFN)-γ, tumor necrosis factor (TNF)-α, and vascular endothelial growth factor (VEGF) are secreted by immune cells within the cyst in response to the presence of OK-432. In concert, these immune activities induce a strong local inflammatory reaction in the cyst wall, resulting in fluid drainage, shrinkage and fibrotic adhesion of the cyst.

In a randomized, Phase 2 clinical trial patients with lymphatic malformations (>90% pediatric) were treated with 1 to 4 injections of OK-432. In this study, most patients (86%) treated with OK-432 experienced a complete or substantial response. Long-term control of LMs was favorable with more than 90% of patients treated with OK-432 having no regrowth of their lesion three years following treatment. 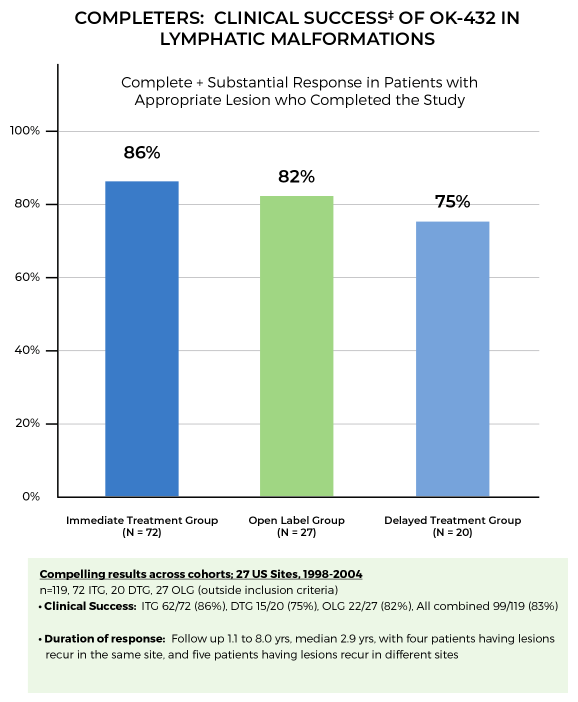 ‡Clinical Success was defined as complete or substantial response Response to therapy was measured radiographically (MRI or CT) by quantitating change in lesion size and graded as:

Choline is a known important substrate for phospholipids that are critical for healthy liver function. Because PN patients cannot sufficiently absorb adequate levels of choline and no available PN formulations contain sufficient amounts of choline to correct this deficiency, PN patients often experience a prolonged progression to hepatic failure and death, with the only known intervention being a dual small bowel / liver transplant. If approved, IV choline chloride would be the first approved therapy for IFALD. It has been granted Orphan Drug Designations (ODDs) by the FDA for the treatment of IFALD and the prevention of choline deficiency in PN patients.

IFALD, which occurs in patients dependent on PN support, is characterized by choline deficiency, hepatic steatosis, cholestasis, and rapid progression of liver disease through to hepatic failure and death in the absence of intestine-liver transplant. IFALD carries a relatively poor prognosis, with a 15-34% death rate within 1-4 years. When IFALD presents with symptoms of liver disease in children, mortality is even higher (23–40%).

IFALD is uniquely characterized by the presence of both steatosis (toxic fat accumulation in liver cells) and cholestasis (damage to the biliary system in the liver) in patients who are chronic (greater than six months) PN users. A patient is considered to have IFALD if she/he is dependent on PN for more than six months (e.g., has chronic intestinal failure); has evidence of steatosis, determined by imaging techniques or histologic assessments; has evidence of cholestasis (e.g., elevated alkaline phosphatase (ALP), elevated bilirubin and/or histology); and may have evidence of ongoing, progressive liver injury on the basis of multiple abnormal liver function tests, in conjunction with findings of fibrosis, cirrhosis, and/or end-stage liver disease (ESLD).

The mechanism for which choline supplementation reverses steatosis and improves cholestasis is not completely understood. However, clinical studies support that exogenous supplementation of choline can restore normal physiologic levels of choline thereby reversing steatosis by playing an important role in the synthesis of very low-density lipoprotein (VLDL), which is necessary to move fat out of the liver. Additionally, choline supplementation plays a critical role in the production of normal, healthy mixed micelles in bile, which protects against cholestatic injury to the biliary system.

Protara had an end of Phase 2 meeting with the FDA in late 2018 and received the FDA’s support for the design of studies necessary to complete the registration package for IV choline chloride for the treatment of IFALD.

Protara Therapeutics is committed to identifying and advancing transformative therapies for people with rare and specialty diseases.

Expanded access, also called compassionate use, makes an investigational product available for treatment outside of clinical trials when no comparable or satisfactory alternative therapy option is available. Protara’s product pipeline contains Choline Chloride. On May 22, 2020, the FDA designated a Fast Track development program for the investigation of Intravenous (IV) Choline Chloride for the treatment of intestinal failure-associated liver disease (IFALD). At this time, it is not logistically feasible for Protara to make IV Choline Chloride available for expanded use. Protara is planning for a registration-enabling study for the treatment of IFALD and will provide more information as soon as it becomes available. Protara will continually assess our current expanded access policy and provide updates to this website. We look forward to collaborating with the FDA and making this important therapy available to patients. Please contact us with any questions at info@protaratx.com.